Posted at 21:41h in Community Involvement by ds_admin
0 Likes

An old familiar friend of Deming Cesar Chavez Charter High School stopped by for a visit to meet with the student body and continue his work with reinforcing values and student success.

Brian Jones, a former NFL player and current college football analyst for CBS College Sports, was the commencement speaker at last year’s DCCCHS graduation ceremony. He was able to offer a path for graduating students to follow that would help them on the road to success in life after high school.

Jones returned to the school and met with students in the gymnasium to further reinforce his stand on helping young adults through life’s channels. Jones was initially invited to speak to the students by DCCCHS Counselor Jerry Lee who coached Jones in high school.

“The staff and students know I have a fondness for college football. I guess it’s because of the values and character it instills in young people,” Lee told the audience.

That is where his tight-knit relationship with Jones comes into play. Jones considered Coach Lee a mentor and a father figure who helped guide him from a a less-than-fortunate upbringing and into a college football career at Texas and UCLA and had a shot in the National Football League. He had stints with the Oakland Raiders, New Orleans Saints, Miami Dolphins and Indianapolis Colts as a linebacker. 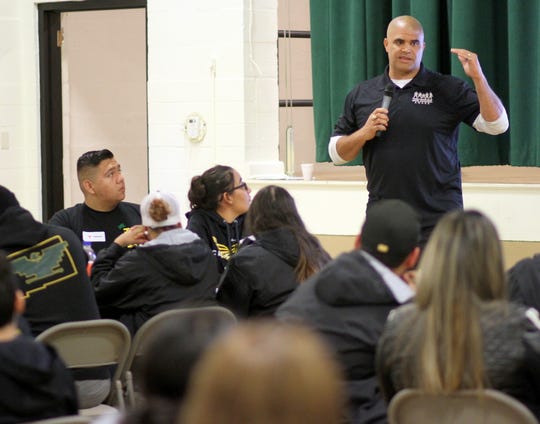 Taylor turned a troubled childhood into a fabled college football career at Notre Dame where he was a two-time All-American. He was a first-round draft pick as an offensive guard and went on to play in the NFL with the San Diego Chargers and the Green Bay Packers. Taylor won a Super Bowl with the Packers.

Taylor shared his troubled childhood and how he was given two paths to follow to adulthood. After seeing the path many of his childhood friends took and wound up dead or incarcerated, the path he chose was an easy choice.

Taylor’s path to success was built on numbers he said. “There is a pathway for everyone in this room. It depends on where you want to go and who you want to be. It’s like a combination lock. If you have the right numbers, you can unlock your pathway to being successful and achieving your goals in life.”

DCCCHS Principal Stan Lyons could not thank the CBS duo enough for their visit. Lee’s reputation as a mentor to Jones has been the driving force in having the students take life lessons from Jones and Taylor.

Deming’s charter school continues to provide quality education to its student and have been recognized on a state-wide scale.